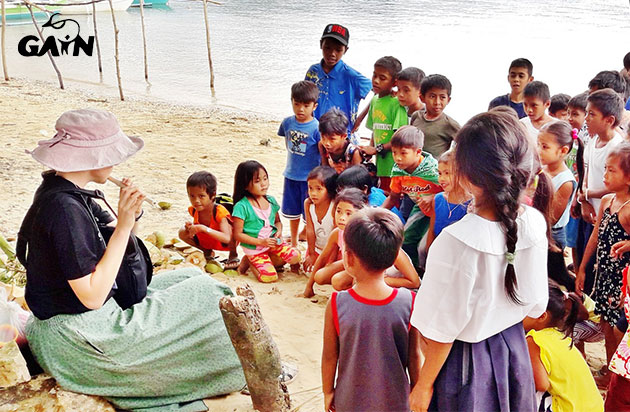 Man heart plans his way, but the Lord directs his steps. (Proverbs 16:9)

Though we may step out onto missions without a clear idea of what we will do on the field, God has it planned from start to finish. The first time I heard about GAiN’s Philippines medical missions, I realised it was an excellent way to combine my passion for health with giving people the best medicine possible, the eternal healing message of the gospel. So after going in November 2017, I returned for the second time in February.

Although I am studying a health-related field, it isn’t usually the kind of thing you hear about on a medical mission – nutrition. Having likely never seen a doctor in their lives, don’t most people need more instant treatment? Additionally, the February team included many more nurses and dentists than my November trip, so I assumed I would be on mostly non-medical jobs.

Most of the team had served on medical missions in previous years, so each already knew what they were doing. And I was ready to just tag along wherever needed. But God doesn’t use people passively. He stretches us so our own strength wears thin and His shines through. During our discussion the evening before our first clinic, our Australian doctor Malcolm called out, “We have a dietitian; why don’t we use her? Let’s have a dietetics station!”

I blinked in surprise. While I was intrigued by the opportunity to use my studies to bless others on the mission field, I was also incredibly daunted. I was still a student and there were no other nutrition practitioners there – what if I didn’t know how to best treat someone?

So I spent the rest of the evening quizzing several locals on Filipino cooking practices, the types and names of fruits and vegetables that were available and what was affordable, to give me a deeper understanding of possible interventions. The next morning, with a quick prayer request to my family back home and to my roommate, I breathed my own prayer for the Lord’s wisdom and walked over to my ‘dietetics table’.

The first patient Dr Malcolm referred to me was an elderly man with a one-toothed grin and a lot of character. The next was a lady with diabetes, then a hypertensive mother and her feverish baby. Within a few minutes, I had lost all apprehension and simply saw these people for who they were – real families with real lives whom God made with thought and purpose. I was delighted to find myself applying pieces of my nutrition and physiology knowledge and relished the challenge of finding recommendations that fit their situations.

Over the two weeks, I talked with between three and twelve patients each day, in groups or individually, and was stretched in many ways. I drew up some visual aids to help explain health concepts. My Tagalog vocabulary expanded to include a long list of foods! My faithful translator, Marlou, soon became so proficient at repeating my explanations and recommendations that when I developed a fever in the second week, she was able to do a lot of the talking herself.

Unlike us, God knows exactly what situations we will encounter on missions and who will be there with what skills. Are you on the ready for God to use you at any moment? I returned to the Philippines because I know how much the people need the Lord. I had no idea God would use me so specifically!

Whatever you do, do it heartily, as unto the Lord and not unto men. (Colossians 3:23)