On a journey…but not there yet! 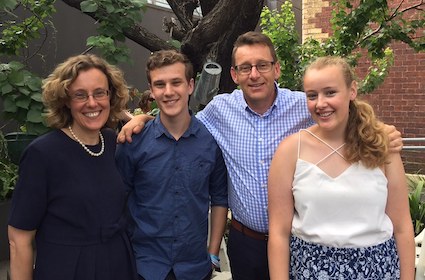 John Altman is a lawyer, an ordained Anglican minister and a donor of Power to Change. In God’s eyes, any job or giving is good when He takes you on a journey of generous giving.

While he was studying arts and law at Melbourne University, two major life-changes happened. He met Kathy, the love of his life and then Jesus, the Lord of his life. Both John and Kathy gave their lives to Christ at university.

As a law graduate, he found work in a large commercial law firm. John shared,  “It was in the mid-80s, an era in the corporate culture where ‘greed is good.’ I left after two years and worked for the State government in the Equal Opportunity Tribunal.” That was a better fit, but the Lord was stirring in his heart.

This led him to study theology part-time at Ridley College and work in a Christian Union group at Melbourne University. He became an ordained Anglican minister and moved around to different churches for experience.

“In 2008, I decided that I didn’t have enough patience to serve in another Anglican church.” But God used this man, lacking in patience, in just one vocation, to set up and work in a business mission project in Tanzania and Cambodia. He was interested in sustainable enterprise to alleviate poverty.

“I wanted to do something good in the world. Money doesn’t belong to us; it belongs to the Lord. There was lots of fighting in my family over money and I want to redeem it for something more productive.” John explained. Therefore, he decided to go back to be a lawyer and set up a law firm that included helping people in mission and Christian work.

John knew about Student Life in his uni years, and recently connected with Power to Change through Rex Campbell in donor development. He has donated his expertise and time to our organisation in handling some legal work and setting up tax deductibility for our partner the Global Aid International Network. He has provided advise on bequests and generously helped in writing wills for missionaries.

He said, “I’m not concerned about making money and I charge closer to what people can afford. I’m more interested in what the clients are doing in mission.”

Growing his faith in using his expertise and time to serve others and mission causes motivates John. “My long-term interest is fostering generosity among Christians. We don’t think enough about stewardship of what God has given us.”

When asked how much are we to give? He replied, “There is no threshold. The world is the Lord’s and everything in it. Generosity is not a particular threshold. We follow God’s standard of generosity. God didn’t love the world so much that he gave 10% of what He had!”

“I don’t think there’s a limit or easy rule to giving. If there is, it will make us feel self-satisfied.”

John’s advice to us on stewardship is to grow in generosity over the years. His is an example of being a Change Maker in sharing his L.I.F.E… that is Labour, Influence, Finance and Expertise to Power to Change and others. It’s interesting that even John has admitted that he is “not there yet!”

In what way might you invest your L.I.F.E.? You may learn how by visiting us at https://powertochange.org.au/youth/opportunities/