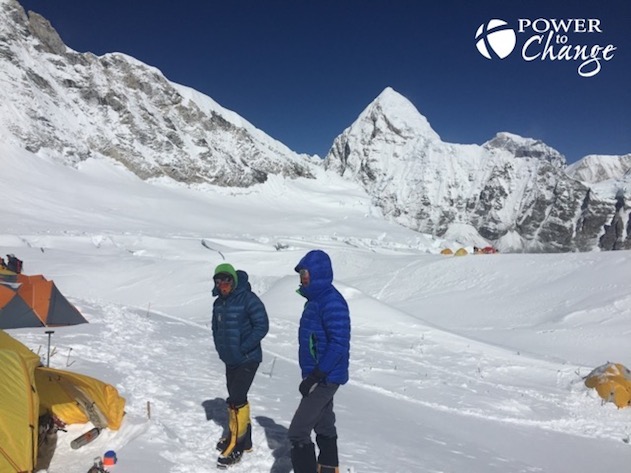 We are excited to share with you an update from John Zeckendorf as he continues on his journey up Mt Everest!

After a false start (see earlier post), we had another go at climbing the ice flow the next day.  We had a similarly early start and made it half way up the ice flow when we suddenly noticed quite a large volume of traffic coming down the ice flow.  Groups ahead of us were turning around and at one point, there was a cluster of sherpas assisting a head injured sherpa come down the ice flow.  The injury was not the reason for the turnaround – there had been another avalanche during the night and part of the route was damaged (as per the previous night).

We climbed up to a semi safe place and waited – in the pre-dawn cold while people constantly passed us coming down the hill and telling us that the route was closed.  Our guide ran ahead (almost literally – the guy is super-human) to see if he could find the problem and a solution and we shivered while waiting for the sun to come up (and reassuring those coming down that we were still going to wait).

After 45 minutes, our second guide came UP the hill (long story) to tell us that our first guide had radioed through and we were to come up the hill.  Each further party we passed assured us that we should turnaround and go back down and there was no way through.  At times, we pretended not to speak English because it was easier than trying to argue with them.

It is an interesting illustration of faith.  We trusted our guide (completely) and although we also wanted it to be true (we didn’t want to have another false start), we still had to act on what we believed to be true. If we trusted the person who told us to come, we had to come up the hill – despite everyone else around us telling us that we should go back down and it was hopeless.  We didn’t actually hear our guide tell us to come (the second guide told us he had said this).  And there was a consequence for getting it wrong (potentially fatal or injurious).  I think that this is very true for Christians.  Jesus tells us to come but we dont often directly hear His voice – we hear someone who tells us what Jesus said and we have to decide to accept Jesus as trustworthy and also the messenger.  This often puts us at odds with what the world says to do.

So what happened?  We kept going up the hill, there was an obstacle but our guide had found a safe way around it and we (with much grunting and effort) made it to the top of the ice flow.

Most people hate the ice flow – for me it is one of the most exciting, interesting and beautiful places.  I never felt in danger (even with avalanches falling near me or crossing dodgy ladders over massive crevasses with garden cord as my safety line) and I am (perhaps naively) looking forward to the next 4 crossings).  The ice flow is the keeper to the heart of climbing Everest and it acts in some ways as a filter to the unworthy (hopefully not including me).  For our group, it filtered out two climbers who decided that they had had enough (in one case) and that they were not able to continue (in the other).  At the top of the ice flow is a sweeping set of massive crevasses that represents the start of the ice flow, Camp 1 and the start of the Cwm (oddly enough = Welsh for valley) depending on your direction.  The Cwm is simply one of the most amazing places in the world (will write on this separately shortly) and the start of the Lhotse face.  The summit of Everest is visible at last (only 2 Mt Wellingtons’s away) and it is suddenly very real (scary and superbly amazing all at the same time).

Back in civilisation (you will have to read on to know why) so able to send some photos from going up (and down) the ice flow.