Is there retirement in God’s economy? 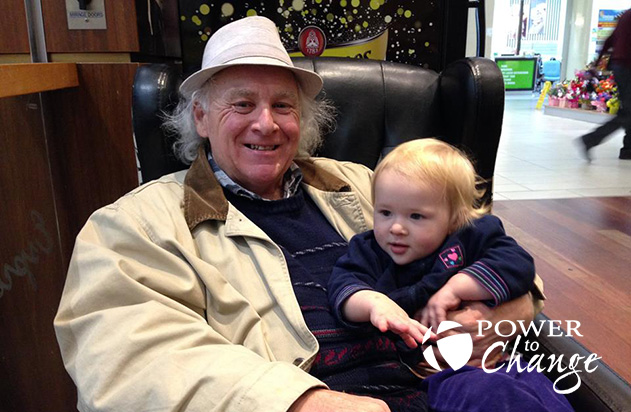 You can always spot him in a room by his hair. It’s fluffy and silver, not unlike the professor in the movie, Back to the Future. He throws quips around at meetings like ‘a pig with lipstick on is still a pig’ in describing superficial changes or ‘if you want to sup with a Scot, you’ll need long arms ’cos they don’t share their food, ’ in describing his visit to relatives in Scotland.

Geoffrey Johnstone found his love of writing late in life and knew he had something to say. So he wrote a book, The Gumtree Pulpit, sharing stories of his experiences as a pastor in churches in Queensland and Victoria. He’s 59-years old and writes for Power to Change as a volunteer.

This is the story of the man behind some of the stories you may have read in Shout and other editions of Power to Change:

Geoffrey said, ‘My dad was a fireman on the railways and was promoted to a driver in Benalla, country Victoria. That’s where I grew up with my siblings. Benalla is as boring as mud, we used to watch the paint dry in school for something to do.  We were forced to go to Sunday school but at fifteen, the penny dropped and I became a Christian.’

At nineteen, Geoffrey went to Bible College for three years. At twenty-one, he took up his first Interim Pastoral position near Port Campbell. Six months later, he was invited to start a church in Port Melbourne with a friend. Geoffrey was the pastor there for five years and described that time as his ‘best years’. He met and married Julie at that church and they had two children. He was a pastor in six churches and each came with its own challenges and fulfilment.  Throughout this time, he had a very difficult relationship with Julie that lasted sixteen years ending with a divorce.

He studied building in TAFE and became a builder while still a single parent with a son and daughter. In 2001, he met Liz from Scotland in a Christian Internet Chatroom. After a year of corresponding, she invited him over to meet her sons who were eight, sixteen and eighteen.  He proposed to her then and they were married in 2003. Liz and her sons came to live in Australia for a fresh start.

Unfortunately, in 2012, Liz was diagnosed with Multiple Sclerosis (MS) and Geoffrey became her full-time carer. He drove taxis in Newcastle, NSW, on weekend nights to provide for the family.

During that time, he happened to read an advertisement by Power to Change asking for writers.

This led to an interview with Ian Finnan from Power to Change, which paved the way for a move to Melbourne in 2013. Geoffrey began writing for the organisation and Liz was able to access the best available treatment for Multiple Sclerosis in Australia.

In 2016, Geoffrey juggled part-time writing, caring of Liz and baby-sitting their granddaughter for several months. It was a roller coaster time of life but things have settled this year.

When asked why he volunteered with Power to Change, Geoffrey said, ‘the church is in decline and that’s a worry. I believe volunteering in evangelistic mission is more important than taking a pay cheque. Since the government gives me a carer’s pension, what free time I have, I want to serve God. I highly recommend that if anyone is forced to take an early retirement, then look seriously at finding a mission organisation to serve. If we don’t, Australia will become a spiritual wasteland.’

It looks like for him, retirement is a relative concept in God’s economy.