Here’s what you didn’t read about Schoolies 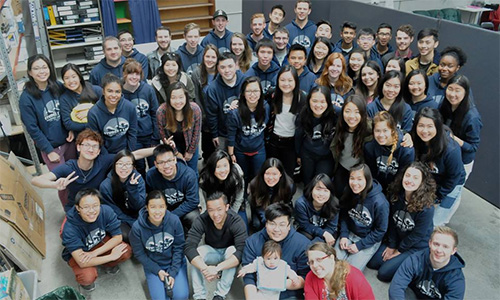 Michael Grace is the new state coordinator for Student Life in Victoria.

I recently caught up with him when 48 tired but happy student volunteers returned from Summer Projects.

“We’ve had a really good year,” the 32 year old Christian leader shared with me. “We saw more people become Christians on campus and the response to Schoolies was excellent.”

As part of a debriefing session each member was given the opportunity to share a story. A young Chinese girl was the first to speak.

“I approached a lady who confessed she was only there to keep an eye on her daughter.”

The room erupted into laughter.

“When I told her that I was part of a Christian group she shared with me that two years ago she was hit by a bus.”

“I mean a literal bus… and she nearly died.”

The woman was willing to hear the Gospel.

“Before I finished my spiel she asked if she could become a Christian right away.”

A young man took her place behind the podium.

“I struck up a conversation with a young man while walking on the beach. He was only seventeen and a recovering ICE addict.”

The room was quiet as everyone listened with interest.

“He had been clean for two years but his addiction had left him with an emptiness. When I took him through the booklet he said it was what he was looking for.”

Another young man stepped forward to share his experience.

“I approached a group of men outside a bar, but they were not interested,” he added emphasis with his hands. “However, one of the guys followed me down the street and asked if he could speak to me later.”

His friends applauded his obvious courage.

“We exchanged phone numbers and I’m going to catch up with him after Schoolies.”

For the past two months God’s people have been asked to pray for Schoolies. This request has found its way into newsletters, church bulletins and homegroups.

No one was surprised when news of “Holy Spirit appointments” began to trickle in. The statistics are impressive. 133 Students approached 3,500 Schoolies and held 999 spiritual conversations. 541 people were challenged to follow Jesus. 65 people said yes.

Michael Grace has cast a vision.

“I studied Psychology at Monash,” he recalled. “But by my second year I knew what I wanted to do with my life.”

He started his journey as a member of staff and then as a team leader. Now, in 2016, he continues to walk by faith as he steps into the role of state coordinator.

“I am quietly confident,” he said with a rare smile. “When people pray God turns up.”